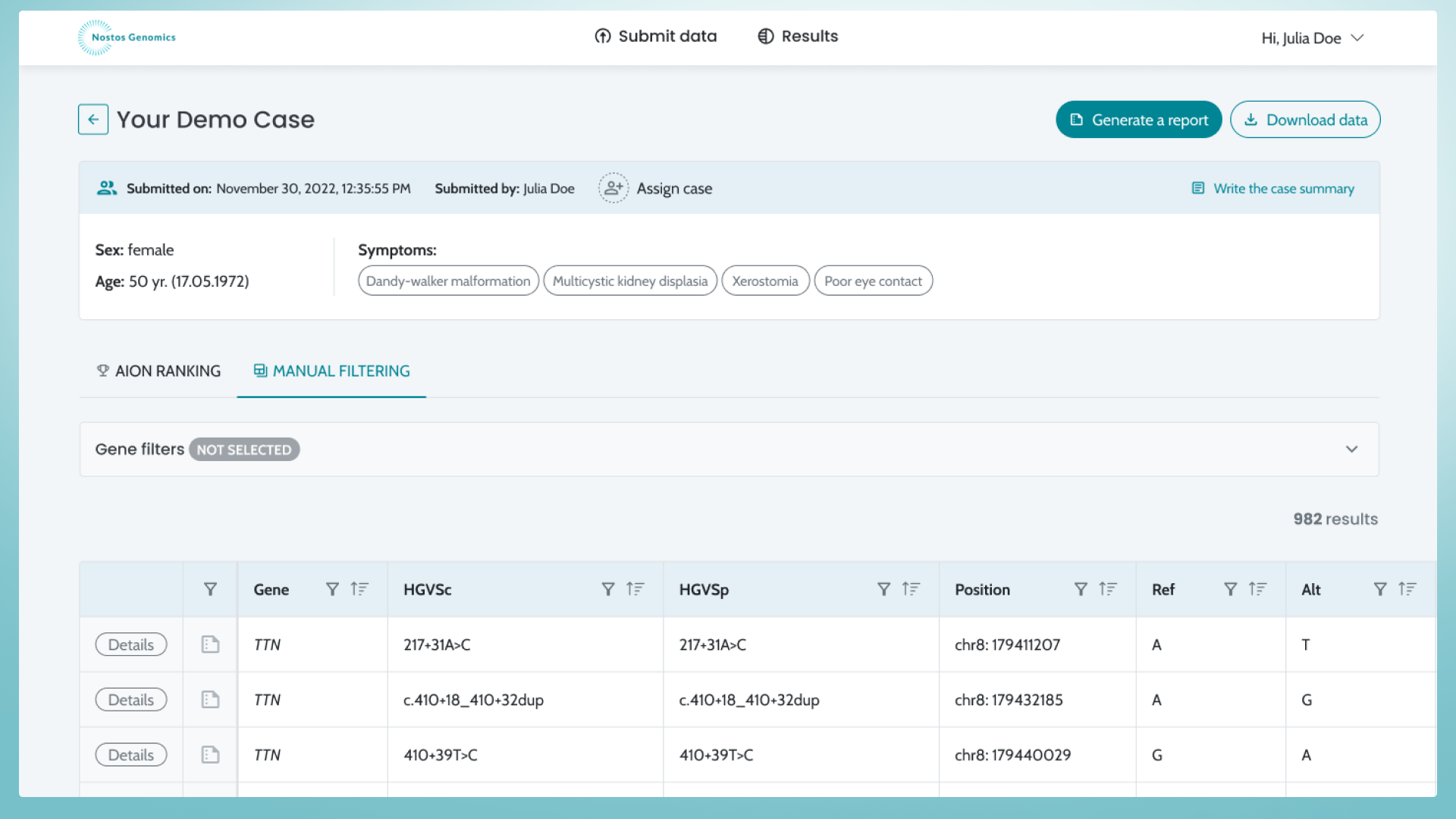 We are excited to announce the release of the latest version of AION, officially version 3.2.0.0! Coming just two months after our November release, where we announced updates to the ACMG classification, WGS and much more. This new release includes several new features based on user feedback and improvements to support our users in making the right diagnosis.

One of the key new features in this release is the manual filtering view, which allows users to browse and report annotated variants easily.

Don't get us wrong; the AION ranking that automatically gives you a shortlist of the most relevant variants will continue to be AION's cornerstone and key feature. This is what lets our customers get more accurate results faster. However, the feature mentioned above helps users verify that all relevant variants are included in the ranking. We aim to keep improving the AION ranking so that these features are required less often. To achieve this and double down on the explainability of the prioritization algorithm, we have also improved the implementation of ACMG criteria!

In addition, our new in silico panel feature allows users to restrict the regions analyzed when submitting an AION analysis by either applying in silico panels or restricting secondary findings, making it even easier to focus on the most relevant variants.

As mentioned above, another significant improvement in this release is the improved consideration of the affectedness of parents in trios and the implementation of ACMG criteria related to cosegregation (PP1, BS4), which helps users to identify variants likely to be pathogenic more accurately. Additionally, the AION pathogenicity classification has been expanded to five different classes (Benign, Likely benign, VUS, Likely pathogenic, and Pathogenic), making it even easier for users to understand the potential impact of a variant.

Powerful improvements to our so-called deny list of frequently seen artefacts have been made, further improving our prioritisation and making it easier for users to focus on the most important variants. The deny list contains known artefacts to be removed from the results.

With new features such as the manual filtering view, in-silico panels, and improved consideration of affectedness in trios, AION is making it easier than ever for scientists to make accurate diagnoses in rare diseases and ending the diagnostic odyssey for patients and their families. As mentioned – these new improvements on our November release are based on direct customer feedback. We are continually working to improve AION based on your feedback, and we invite you to try it out for yourself and help us make it even better. Together, let's push the boundaries of rare disease diagnostics and variant analysis.

Curious? Watch our brand new demo-video giving you a high-level overview of AION.